My living room was the biggest sacrifice in choosing my house. I loved the layout. I loved the kitchen. Even though the kitchen needed some major work to better reflect our style, it was big and perfect for large family holiday meals.

But the living room.

It was small. It was the ugliest shade of Halloween orange. The paint job was incredibly messy, and all over the ceilings and trim. There was a big white air return in stark contrast to the dark orange living room walls. The vaulted wall opposite the window wall seemed so empty despite my best efforts to fill the space. It screamed to be filled, but no matter what I hung, the wall stretched up so high beyond my decor that it looked silly and small in comparison to the height of the vault.

First, I got rid of the orange, updated the fan, and then added the bats and railing. The single pane of glass in the eyebrow window, which just so happens to be situated right where the sun sets each day (and thus made the room climb to 97 degrees in the summer around sunset), was replaced with a gas-charged double-paned window with a grid inside.

It wasn’t so bad. But it still wasn’t a room I liked very much.

J.T. closed in the hole in the wall of the entry that I was never very crazy about and added crown molding around the vaulted ceiling.

Then my birthday came around last January and J.T. built me some shelving for my books. The built-ins made a HUGE difference-and beautifully filled that wall that I could never seem to fill.

Then for Christmas this year my gift was ceiling beams and recessed lighting. The room was super dark at night, as there is just the one ceiling fan light in the middle of the room. Now, with the addition of four tilting can lights made for vaulted ceilings, we can FINALLY see!

The beams, however, are my favorite project. They have added so much dimension to the room, and your eyes can’t help but trace them all the way to their peak. Though the issue of the room being small still persists, the room literally feels twice the size it appeared before.

This is one of those instances in which pictures just cannot do justice! It’s so hard to capture the detail in a vaulted ceiling with a photo, but it feels like a completely different room, and it’s a room I actually love now. I never thought that would be possible! It all goes to show that with a little creativity and a whole lot of skill, a truly hideous room can become the showstopper of your home! 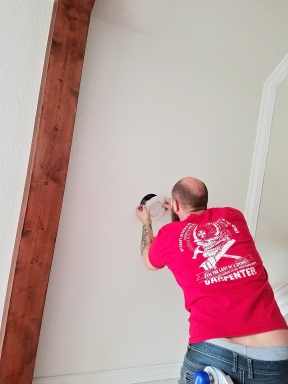 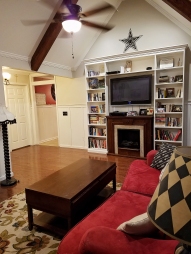 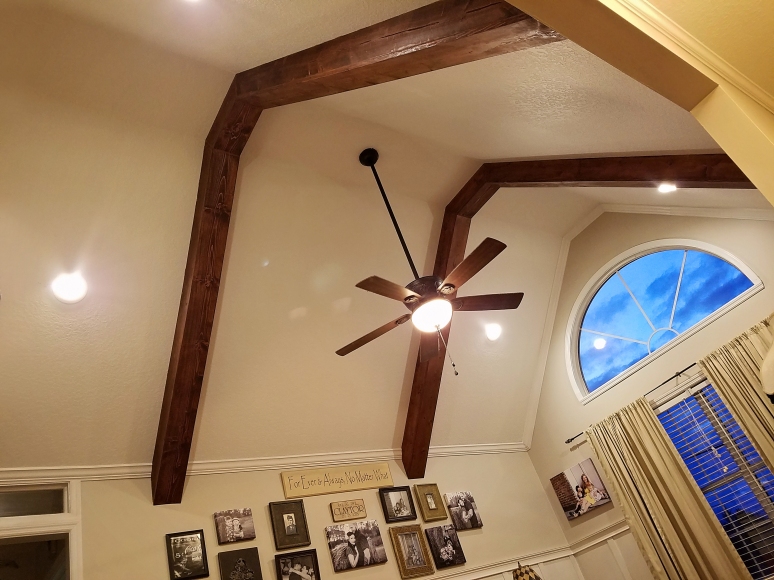